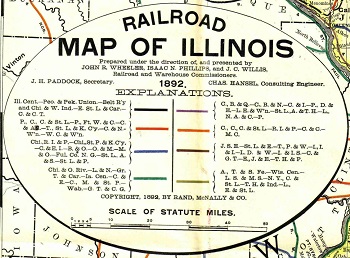 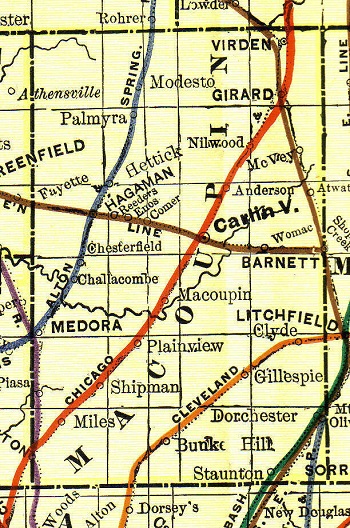 There was no explanation in the book about the many railroad lines for one color line. Bob Mosher believes that the reason for more than one railroad line for each railroad color may be that the lines probably had contractual agreements; in some cases they were local feeder lines that ONLY fed into a main line, in others they appear to be trunk lines that continue a route.

Legend with the abbreviations written out. Most towns on the railroad lines in Macoupin in 1892 had a coal mine in them.

Several railroads enter and cross Macoupin county. The Chicago & Alton enters the county on section 4, in Virden township and traverses the county in a southwestern direction, leaving it at Brighton, on section 19. The most important stations are Carlinville, Girard, Nilwood, Shipman and Brighton. In 1852 the road was completed between Alton and Springfield and in 1864 trains were running to East St. Louis. Later, the road entered the city of St. Louis.

Extracted from History of Macoupin County, by Charles A. Walker, published in 1911, volume 1, page 307. 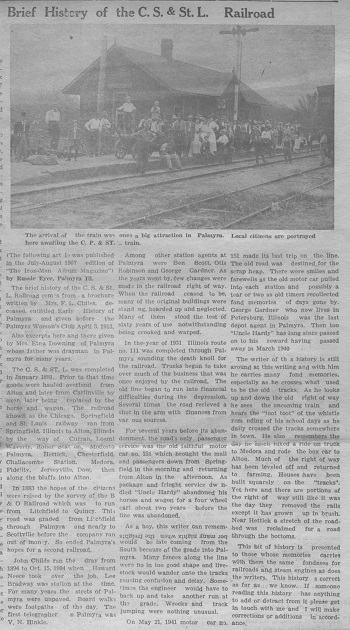 The brief history of the C. S. & St. L. Railroad comes from a brochure written by Mrs. F. L. Chiles, deceased, entitled Early History of Palmyra and given before the Palmyra Woman's Club April 3, 1913.

Also excerpts here and there given by Mrs. Etna Downing of Palmyra whose father was drayman in Palmyra for many years.

The C. S. & St. L. was completed in January 1881. Prior to that time goods were hauled overland from Alton and later from Carlinville by oxen, later being replaced by the horse and wagon. The railroad known as the Chicago, Springfield and St. Louis railway ran from Springfield, Illinois to Alton, Illinois by the way of Curran, Loami, Waverly, Roher Station, Modesto, Palmyra, Hettick, Chesterfield, Challacombe Station, Medora, Fidelity, Jerseyville, Dow, then along the bluffs into Alton.

In 1883 the hopes of the citizens were raised by the survey of the B & O Railroad which was to run from Litchfield to Quincy. This road was graded from Litchfield through Palmyra and nearly to Scottville before the company ran out of money. So ended Palmyra's hopes for a second railroad.

John Childs ran the dray from 1894 to Oct. 15, 1904 when Howard Neece took over the job. Lee Bradway was station at the time. For many years the streets of Palmyra were unpaved. Board walks were footpaths of the day. The first telegrapher in Palmyra was V. N Hinkle.

Among other station agents at Palmyra were Ben Scott, Otis Robinson and George Gardner. As the years went by, few changes were made in the railroad right of way. When the railroad ceased to be, many of the original buildings were standing, boarded up and neglected. Many of them stood the test of sixty years of use notwithstanding being crooked and warped.

In the year of 1931 Illinois route no. 111 was completed through Palmyra sounding the death knoll for the railroad. Trucks began to take over much of the business that was once enjoyed by the railroad. The old line began to run into financial difficulties during the depression. Several times the road received a shot in the arm with finances from various sources.

For several years before its abandonment, the road's only passenger service was the old faithful motor car no. 151 which brought the mail and passengers down from Springfield in the morning and returning from Alton in the afternoon. As package and freight service dwindled "Uncle Hardy" abandoned his horses and wagon for a four wheel cart about two years before the line was abandoned.

As a boy, this writer can remember many nights when the freights would be late coming from the South because of the grade into Palmyra. Many fences along the line were not in too good shape and livestock would wander onto the tracks causing confusion and delay. Sometimes the engineer would have to back up and take another run at the grade. Wrecks and track jumping were nothing unusual.

On May 21, 1941 motor car no. 151 made its last trip on the line. The old road was destined for the scrap heap. There were smiles and farewells as the old motor car pulled into each station and possibly a tear or two as old timers recollected fond memories of days gone by. George Gardner who now lives in Petersburg, Illinois, was the last depot agent in Palmyra. Then too "Uncle Hardy" has long since passed on to his reward having passed away in March 1940.

The writer of this history is still around at this writing and with him he carries many fond memories, especially as he crosses what used to be the old tracks. As he looks up and down the old right of way, he sees the oncoming train and hears the "toot toot" of the whistle reminding of his school days as he daily crossed the tracks somewhere in town. He also remembers the day he hitchhiked a ride on truck to Medora and rode the box car to Alton. Much of the right of way has been leveled off and returned to farming. Houses have been built squarely on the "Tracks." Yet here and there are portions of the right of way still like it was the day they removed the rails except it has grown up in brush. Near Hettick a stretch of the roadbed was reclaimed for a road through the bottoms.

Design by Templates in Time